The Legend of Bass Point 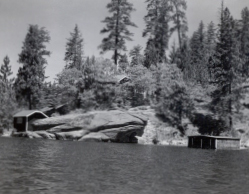 The following was written by Anne Muzzy and presented at a Tri-Community Grange picnic held May 18, 1952.

Before the 1880’s, each summer the shady shores of Newman Lake were covered with Indian encampments. The Indians roamed the hills for huckleberries which they dried and made into pemmican for winter. They roamed the meadows for camas root which they dried and ground into flour. The main diet of the Indians was meat, which was very plentiful then. The wild deer, peasant, grouse and rabbit could be killed by their speedy arrows with no effort. Part of the venison was jerked and dried for winter use. Many arrowheads have been picked up in this neighborhood. For a variety, they would paddle out onto the placid lake and fish. There were sweathouses on the lakeshore where the Indians took their sweat baths. One sweathouse stood on the southeast shore until recent years. The Indians returned each summer for many years after the white settlers began moving in. At a gathering on what is now known as Bass Point a lady lost her slipper. After that, the point was called “slipper point”. It was renamed Bass Point just in recent years.

Here is an Indian story told by early settlers: Slipper Point is the end of a long gradual ridge. The Indians used this as a playground and a place to race. One time at a gathering there, they were having their contests in archery and their races. During one the races, from the top of the ridge to Slipper Point, a running Indian ran into a partially fallen, slivered and splintered tree. A long splinter was run through him and killed him. The Indians immediately stopped their games and left the lake. They thought the evil spirits had placed the splintered tree in their way to chase them away. No more happy summers on Newman Lake for the Indians. Those who were old enough to come back to the lake refused to stay overnight. They feared the ill will of the evil spirits.

Just after 1880 the white people began coming in and homesteading. William Newman, after whom the lake was named, owned part of the Breneman place and Umbach place. Newman settled at Newman Lake in 1860, the exact date has not been verified. From 1860 to 1865 he lived at Rathdrum then returned to Newman Lake. Some of his neighbors were Steve Liberty, after whom Liberty Lake is named. John McCoy settled the Taylor place. (Shorts now lives on the Taylor place). John Shaw had the Dr. Barton place. This house was originally a log house. It’s the first house on the right when you turn onto Hood road to go up Thompson Creek (now named Thompson Creek Road). In 1935 or ‘36 the log house burned down. At that time the Thomas Edward Simpson family was living in the house. They now live on Starr Road.

The Thompson brothers, Will and Louis came in 1884. Thompson Creek was named after Louis Thompson, who spent many years on the creek. He built a fish pond and stocked it with fish. Mr. Thompsons’s first log house stood on the hill of what was later the Fred Peuck place. Later the Thompson home was sold to Hugh Laughlin who later sold it to Erol Wert. The Thompson house was built in 1911 and is still standing.