Innovative Technology Installed and Being Tested to Improve Water Quality 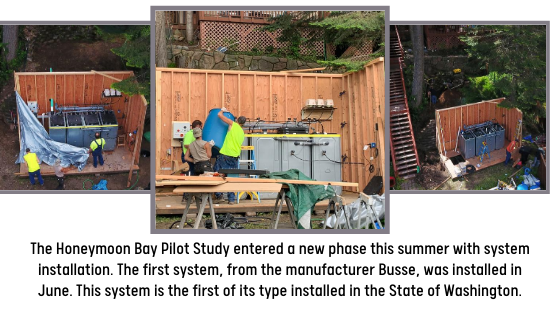 August 6:  Spokane Conservation District is collaborating with the Washington State Department of Ecology, Spokane County, and local property owners to improve the health of Newman Lake by finding an alternative to failing septic systems. A pilot project, started this spring, aimed at installing small-scale enhanced treatment upgrades for two sites in Honeymoon Bay. This state-of-the-art technology has been shown to be far more effective at protecting public health and water quality than the systems currently in use.

Our work at Newman Lake has shown that septic systems contribute to high levels of phosphorus and nitrogen, causing frequent water quality issues such as excessive algae and aquatic plant growth. This project will allow monitoring of the wastewater when discharged from the enhanced treatment systems.

Thank you for participating in our Feb. 5 meeting outlining the Newman Lake wastewater pilot project.

We’re grateful for your time and commitment to helping explore this cost-effective, state-of-the-art treatment alternative over the course of the next year.

To summarize the plan:

At that time, we’ll schedule a meeting with you and your neighbors to discuss possible next steps. While this project is in the early stages, if it proves successful and property owners agree, similar small-scale treatment systems could be installed on properties around the lake over several years.

Ecology would permit these systems under a state waste discharge permit, which can only be issued to public entities. The final small scale treatment systems would therefore rely on a sewer district to oversee operations and maintenance.

Much remains to be done before further steps are considered, and we look forward to working with residents to achieve long-term water quality improvements. Meanwhile, we encourage you to visit sccd.org/newman-lake-water-treatment-alternative to learn more about the project, watch the Feb. 5 presentation, and download materials to share with neighbors who were unable to attend the meeting.

Thank you for your continued interest, input and participation,

I. Dept. of Ecology (DOE) Cynthia Wahl on 6-7-19:
–  Spokane County Conservation District (SCD) still has the grant money available.
Belsby Engineering has completed the feasibility study.
–  DOE is working through the cultural resource review process which requires monitoring for Indian artifacts etc. when breaking ground.
Biomicrobics met the requirements and worked with the Dept. of Health to step down from a Class A to a class B water classification which does not require turbidity monitoring.
–  SCD employees identified several homes in HM Bay that could be in the pilot project.
–  Spokane County Health does not want to be involved because they are understaffed.

II. Spokane Conservation District Walt Edelen on 6-11-19:
–  The DOE will decide the amount of monitoring that will be needed for class 3 certified wastewater.
–  DOE is working with the Biomicrobic’s Kansas office to try to get them to donate services for the pilot projects in HM Bay.
The earliest that the pilot projects will break ground will be this fall.
–  DOE has the purse strings now to proceed and SCD has to abide by their grant.

III. From Spokane Conservation District Lindsay Chutas 6-13-19
–  SCD is working with DOE and Biomicrobics to kick off the pilot project.
–  Ecology is developing its monitoring criteria for pilot systems.
–  The SCD still has the funding to implement the pilot projects.
–  The development of the pilot project is proving to be extremely slow.

The Washington Department of Ecology is collaborating with the Spokane Conservation District (SCD), Spokane County and local property owners to improve the health of Newman Lake by finding an alternative to failing septic systems.

This April, a pilot project will install small-scale enhanced treatment upgrades at up to three sites in Honeymoon Bay. This state-of-the-art technology has been shown to be far more effective at protecting public health and water quality than the systems currently in use.

While it may seem that not much is happening, progress is being made behind the scenes on multiple efforts to change and improve issues specific to Newman Lake such as water quality and overall lake management.

For many years, Honeymoon Bay has had issues with sewage ending up in the lake along with stormwater runoff. A wastewater feasibility study, paid for by a grant secured by the Spokane Conservation District (SCD) and assisted by a committee of volunteer Honeymoon Bay residents, has recently been completed by consulting company Belsby Engineering. The study area consisted of 80 land parcels which included 60 single-family homes in Honeymoon Bay.

They found that only 27 of the 60 homes have wastewater systems on record with the Spokane regional Health District which stated keeping records in the early 1970s.  Their study found that three  of these systems were  cesspools , which are  not  allowed  under  current  health district  rules  and  are  a hazard  to  human  and  environmental health. 18 of those on record have septic systems with drainfields, and 6 are using holding tanks. The condition of these is not known but the majority of them are several decades or more old and most likely inadequate or need replacement, according to the feasibility study. The 33 that are not on record are assumed to require replacement.  The report also says, while there have been no income surveys conducted, the  community  would  need  financial assistance  in  the form  of  a grant  or  a low  interest  long-term  loan to  afford  new treatment systems.

In  order  to  select the appropriate system and  develop  accurate cost estimates, several different kinds of septic systems were considered, including STEP  (Septic  Tank  Effluent  Pumping)  systems that would  require   each  house to  have its  own  septic  tank  that pumps  the liquid to  a  common  aerated lagoon; and Membrane Bioreactors that treat sewage with individual systems for each home, or in “pods” of 1 to 3 homes.

A detailed description of each of the alternatives considered, and the entire feasibility report, are available at http://sccd.org/departments/water-resources/water-resources-publication-library.

In early January, Honeymoon Bay residents had a meeting to discuss the results of the study and the next steps. The group decided to pursue a pilot project using the preferred alternative, the Biomicrobics MBR system. A second meeting, this one of the volunteer committee and the SCD, was held in late January to start identifying potential sites for components of the project.

One challenge that has to be addressed before any system can be built is management of permits and hiring or creating of an entity to manage the entire system. At the same time these discussions have been underway in Honeymoon Bay, volunteers from around the rest of the lake have been researching the possibility of a larger management body to manage the entire watershed.

The Newman Lake Flood Control Zone District (NLFCZD) has been the management body that has been used to date. It is run by staff in Spokane County’s engineering department who are advised by a NLFCZD Advisory Board (AB) of Newman Lake property owners. The Spokane County Commissioners are the legislative authority and make the major decisions for the NLFCZD.

There have been concerns in the past over whether the county is doing an adequate job and a lot of frustration over tax assessments that currently have some major inequities and seem to increase every year, expensive equipment that is not being maintained, and strained relationships between AB members and county staff.

County commissioners have recently agreed that another entity may  be a better way to manage the water level, water quality and other aspects of the lake. Volunteers have been looking into what it takes to form another governing body, such as a water district, or if the current Moab Water District would be interested in taking it on. An attorney has been working with these volunteers on a pro bono basis to identify the potential options.

If a larger, overall district is formed with the goal of improving the overall water quality of the lake, it may be able to manage Honeymoon Bay’s septic project as well, and expand the idea to other areas of the lake to reduce the flow of nutrients into the lake from septic and runoff issues.

Updates on these issues will be posted as new information becomes available and as volunteers are needed to move forward. Please check back to NewmanLakeWa.com often for more information.